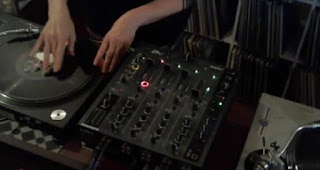 If there’s one thing that keeps the home fires burning it’s discovering new DJs. I’ve always been drawn to them rather than recording artists because I like to think of myself as one myself. I lack the patience and the innate nerdiness to make my own tracks, and I also find playing other people’s music in new and interesting ways a much more fascinating proposition. Bearing all this in mind it’s always great to hear about how other, ahem, colleagues, approach the wheels of steel, and discover similarities and differences in sonic philosophies. Leah Floyeurs, an Aussie expat who was bitten by the techno bug back in the early nineties in London, is a person whose genuine love for what she does comes through clearly in the following interview. She’s also done the decent thing and provided a mix which showcases her talents, so  enjoy this insight into someone who has a real passion for their craft and who will, I’m sure, go from strength to strength.

Hi Leah. First thanks very much for agreeing to do this interview. I’d very much like to know what the last records you bought were, and if they are typical of the type of stuff you spend your money on.

Thank you for asking me Paul. I had a look through your blog and I really enjoyed reading it – trip down memory lane!

I haven’t bought tunes in a few months – the most recent was the second series of the Infiniti ‘Game One’ remixes,specifically for Steve Rachmad’s version; John Beltran’s album ‘Moth’, a variousartists release on Texas Instrumentals with a typically brilliant Convextion track, and another various release on Dimension Recordings with a cracking tune from Obsolete Music Technology (on your mix).  I also picked up Burial’s ‘Pre-Dawn EP’, a two tracker, which is a satisfactorily intense banger that you would expect to hear well into a techno set, but I decided to open your mix with it because it’s a sample jumble that demands to be noticed and there is so much going on. Brilliant track. This purchase is typical of what I am always hunting for.

How often have you cleared a floor and did you learn anything from the experience?

I’ve definitely cleared a floor twice, (probably more), and I have certainly played to empty rooms. If I could choose one over the other, I would rather clear a floor than play to an empty room, but in the greater scheme of things, I enjoy it either way.  How you respond to clearing a floor and what you learn from the experience goes to the heart of why you are playing records in the first place; how you view your art and what you are trying to achieve through its expression. There was a point in my life where I thought I would never be able to play records; I would never have the confidence, there were too many factors going against me (or so I thought) and I spent many years carrying this complacent sadness and a resignation to grow old and make do. When I eventually took the initiative to change my daily routine and quit my full-time job, I was so focused on what I would play and how, that when the time came to clear a room it simply reinforced my conviction.  So playing records has been (and continues to be) a healing modality for me.

Do you engage much with the crowd while playing, and is it even necessary?

It depends what you mean by engage – although I am confident with my style and sound, I do find the concept of hiding behind a great sheet or playing from a hole in the floor very appealing. But it’s all been done before. For me it’s not so much about being noticed, but rather being appreciated by a few, for the specific contribution I have to offer, which is a very small part within a massive global industry.

How would you describe your style behind the decks, and what sort of set up do you prefer.

I am easy to please – just two Technics and a mixer with a working crossfader.  As long as I can see, and hear, I am happy.  Learning how to tackle a club environment, especially when you are playing vinyl, is an experience that requires training in itself. I’ve played on some very awkward setups where my flexibility – physically – gets tested! I was a bit of slow learner when it came to listening to advice to take my own needles, but that’s something I always do now. I consider myself extremely fortunate to be resident at a festival (Freerotation) and a club (50arc) where the promoters take the sound and set –up for the artists very seriously indeed. There is an interesting piece on RA which raises the issues with playing turntables in clubs  https://www.residentadvisor.net/features/3109  and I couldn’t agree more with some of the points raised. Regarding my style, I play up-tempo heady melodic techno, quite hard and a bit twisted in parts. Although I love getting into long mixes, I really enjoy the challenge of mixing records quickly, but it is frustrating not being able to play tunes at the pace I want to maintain.  If every club was fixed with decks that had a range minus 16 to +16 then that would be amazing, but I doubt that will ever happen. So at some point I will need to take the jump into the digital realm and catch up with the rest of the world.

You maintain a website as well as the normal social media outlets. What does the site do that the others don’t?

The website was set up with the help of a dear friend Theresa Stabb, and it just acts as hub really; my personal space, where people can access all my mixes via Mixcloud, Soundcloud and Hearthis and keep a track of where I am playing next.

It was through the website that I discovered Wallflower, your collaboration with Alison Marks. Do you have any plans to make more music, and if so, of what sort?

Wallflower released two releases on Rebirth: ‘Say You Won’t Ever’ which was remixed by Larry Heard and licensed through Defected, and ‘Manifest’, which aptly took about five years to manifest! It was a steep learning curve at times and we had so much fun together in the studio. We had many nights where we would just end up in fits of laughter, having created a track that was so far removed where we had started, or just scroll through samples that sounded wholly inappropriate for the vibe. There is nothing planned for Wallflower in the immediate future and I want to focus on making music which is, quite simply, a lot harder and intense. Over the past few months I have been visiting 50arc studios (run by 50arc founders Charlie Tear and Helen Copnall) and exploring a stack of equipment with them. I really am at the bottom rung when it comes to understanding a studio. It’s like learning another language, and I can only speak Australian!

Could you please describe the mix you have done to accompany this interview? Is it typical of what you would normally play? How adaptable are you behind the wheels of steel?

I was feeling inspired by recent mixes of BNJMN, Neel and Paula Temple – so the result was a fairly consistent mix, perhaps more trippier than usual.  But I found two tracks that I had completely forgotten about, both of which I had never played at all – Pfirter ‘Universe (Edit Select Dub)’ (Selected Edits) – what a tune! And that slice of Robert Hood’s Minimal Nation that never got touched, because trying to mix it was like taking a bungee jump into a cloud of locusts. But I am definitely going to be playing these two out more. As everyone knows, buying records is a serious financial commitment, so it’s very exciting when you rediscover tunes in your collection.

How important do you think it is to have any technical skills when playing, or is having good taste the most important thing?

I think it is crucial to have good technical skills because that is what mixing demands. All electronic dance music DJs should mix their records. For me that is the whole point of keeping a room dancing.  Having good taste is entirely subjective so it can’t really be used as measuring stick. If you’re not enjoying the tunes then you’re not in the room.

Which records “never leave your bag”? And is it possible for you to give an all-time top five? (Assuming the lists are different)  Records that never leave my bag at the moment are:

Anything by the Zenker brothers


Two releases on Adapted Vinyl which are also in my all-time top five:  Neil Iceton’s 'Singularity EP' and 'Faster Breeder' by Suade

Three more picks if I have to squeeze it into an all-time top five: 'Journey to the Martian Polar Cap' by The Martian, 'Blakes Vision' by A Sagittariun and 'People’s Revolution' by Jay Denham.

What does the future hold for you as a DJ?

My philosophy is to dream big, be patient, persistent and have no expectations. I need to break out of my comfort zone and focus on tackling the studio and music production.  Just need to keep taking the vitamins.

Leah also has a radio show, 'Leah With Sound', which can be found here.