Machines Are Funky: 23/2/08 with Dyed Soundorom


There are links to Dyed's Myspace and Freak n' Chic's in the previous entry. There are also links to Soma's and Funk d' Void's, which brings me around to the competition
question. 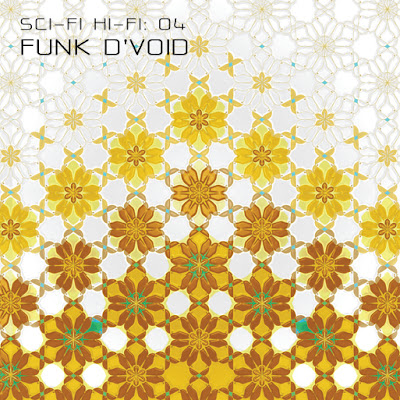 I've got two copies of the above cd to give away. (BTW, I don't know why the jpeg has turned blue, it should be brown/beige. To win one of them answer this question.

What is the name of Funkd' Void's first album?

The comp will stay open until my next show on the 8/3. You can send answers to me at corey.paul@209radio.co.uk.


Mark your emails "Funk Competition" and please include all contact details. Alternately, leave a comment on this blog between now and the 8/3. Again leave contact details, plus email address. Good Luck!

A lot going on here over the next week. Girlfriend going into hospital for a few days, all hands on deck. Could anybody expecting feedback please be patient? Cheers.
Posted by Pollux at Sunday, February 24, 2008 No comments: Links to this post

Machines Are Funky: 23/2/08 with Dyed Soundorom Mix and Competition 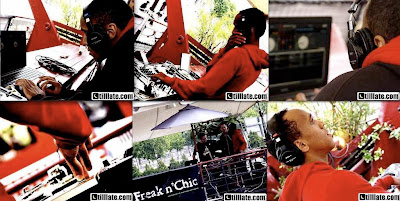 This week's show will see the second hour given over to a guest mix by Dyed Soundorom on the occasion of his first release on Parisian label Freak n' Chic. See this bio from, predictably, a press release.

Dyed Soundorom is one of the most exciting young talents to come from the late-90s Paris club scene. 2008 is set to be the year when he goes from a cult underground player to a fully fledged talent on the European dance scene.


At 26, Dyed has been immersed in clubland since the age of 18, when his fascination with Michael Jackson's Thriller and his older brother's mixtapes pulled him headfirst into the world of electronic music. He was a promoter first, making an immediate splash through running the infamous React parties at Les Bains Douches.. Becoming a DJ was a natural extension through his love for the music he heard at React and also at parties like Kwality at Batofar (Dan Ghenacia's residency) in Paris. It was there he met Dan Ghenacia, Shonky and :Terry: - aspiring, inspirational artists with whom Dyed felt an immediate connection. Their free-spirited ethos and passion for deep electronic music coincided with his attitudes and it was the beginning of enduring friendships.


Dyed quickly developed a devoted following of fashionistas, artists and the hippest clubbers in Paris as he played at parties Alcazar and Batofar. London promoters Foreign Muck wooed him over the pond to make his UK debut and since then he's become a fixture at London's best clubs like T-Bar and Fabric; as well as across Europe, including Spain, Italy, Belgium and Germany.

After the success of his 'Mezzanine De L'Alcazar' compilation that Dyed mixed with Chloe, Dan Ghenacia invited Dyed - alongside Shonky - to do a mix for the premier Freak n' Chic Rendez-Vous compilation, released in April 2007. "They're amazing DJs and they've supported me from the beginning," Dan says simply.

In addition, I'll be playing some wonderful stuff myself and there'll be a competition to win two copies of the new "Hi-Fi Sci-Fi Volume 4" mixed by Funk D'Void on Soma. Keep it locked.


Click on the link to listen live tonight from 7-9pm.
Posted by Pollux at Saturday, February 23, 2008 No comments: Links to this post 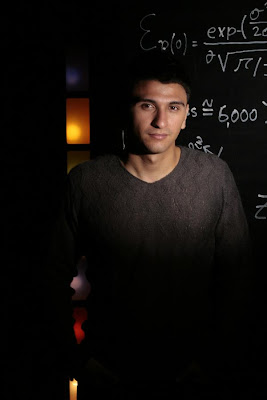 "Quivery" is a competent acid bubbler which, while offering nothing new, at least feels like it means business and will always be a helpful set addition when things start to flag just when they need to be getting more serious. It's a mixing track by any other name, "meat and potatoes intensity" with some nice "tuneful" white noise as a backdrop. "Tokyo Shanghai" uses slightly jarring notes to get things going along with sporadic rattles and echoes to eventually create mass wonkiness, the type that will all make sense in a sweaty back room with cheap lighting and BO (now the smoking ban's in full effect). A solid two tracker with it's heart firmly in hedonism.

Ed DMX at The Priory 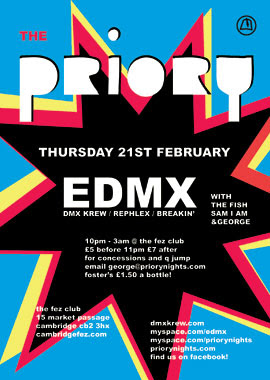 This Thursday local lads The Priory will be welcoming old school stalwart Ed DMX to the Fez. It's the latest in an ongoing series of quality programming for the boys. Ed follows on from Luke Slater last month and precedes the best of the bunch, Andy Weatherall, who'll be gracing the decks on Maundy Thursday thus ensuring a packed house as it'll be the holiday season starting on Good Friday.

Here's a link to an interview with Mr DMX from Richard Brophy's TEST blog. Very interesting . . .
Posted by Pollux at Sunday, February 17, 2008 No comments: Links to this post

I'm off to France for a week on holiday. Some sounds will go up next weekend when I'm back, and a new mix by the end of the month.

Take it easy
Posted by Pollux at Saturday, February 09, 2008 No comments: Links to this post 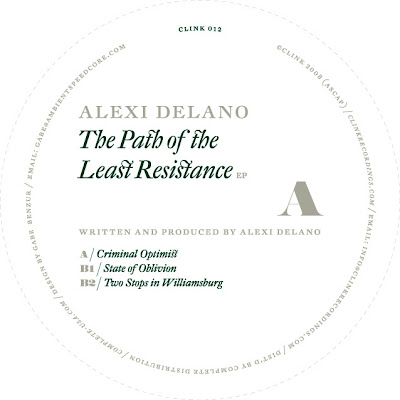 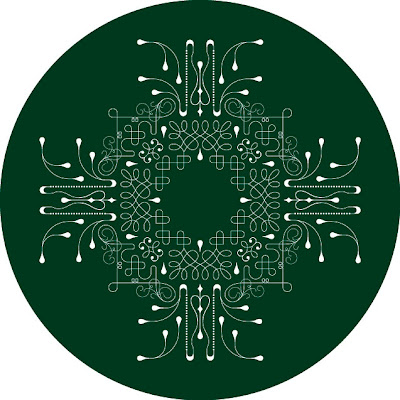 Clever, four-to-the-floor minimalism from veteran scenester Alexi Delano. "Criminal Optimist" is an elastic groove that calls to mind a team of drunken frogs walking a tightrope. They'll get there, but there'll be twists and turns en route. "State of Oblivion" is an urgent shuffler that, aided by the use of some sharp-edged stabs and a concave backing, will find it's way into the bags of most discerning selectors. Finally,. "Two Stops in Williamsburg" is another intelligent groove that falls somewhere in between the tempo of the previous two tracks and uses a funky flange to good effect. All together a package from the darkside from Mr Delano. 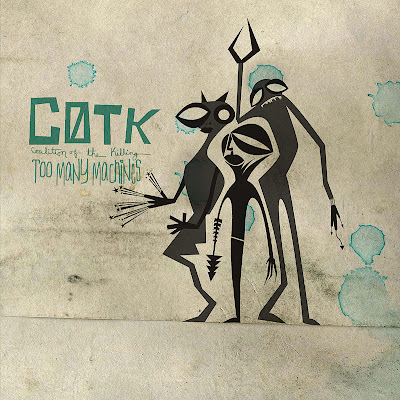 Low-key atmospherics from COTK. "Too Many Machines" is, in it's original mix, a dubby affair with robotic vocoders murmuring sinisterly as if in a state of long-awaited evolution. This change of state is further enhanced by the speeding up of the synth, but things implode and collapse back to their original state. The Franklin de Costa remix is an abrupt tour through a twilight demi-world of stark proportions, a useful DJ tool, while Argenis Brito's effort is a cross between the two. An uptempo, but slightly less abrasive, take on the original; minus some of the touches that mark out the original. It is, however, my favourite of the three versions on offer.

From the press release:

Cihangir is taken from the recently released Istanbul record by Wax Poetic. It’s the latest incarnation that sees frontman and Nublu founder, Ilhan Ersahin (tenor/keys) hook up with renowned Turkish vocalists and musicians to create their own picture of modern day Turkey – a street-art portrait that is vibrant and current, one that tosses the ‘world music’ misnomer on its head.

An interesting and varied three tracker. Brennan Green's remix is a lazy, jazzy groove that has one imagining a heavy session on the hookah, fugs of smoke being pushed across space by the vaguely bossa-novaish tempo. DJ 3000 has no trouble applying his trademark percussive touches to the Turkish - inflected ambience, hailing as he does, from not too far away in Albania. Ghostnote's (aka Anton Esteban and Alex Posell, the DJs from the esteemed New York underground disco crew, No Ordinary Monkey) remix is one for the warm-up. Atmospheric and clandestine, serious too, hinting at things to come.

A strong package with each interpretation being very useful and individual.
Posted by Pollux at Wednesday, February 06, 2008 No comments: Links to this post

As the great Jimmy Cricket once said. Meanwhile, here's a few jottings on some recent releases.

Three versions of the same track. Don't really know what I expected the Gus Gus remix to be like, but it's ordinary and sounds like they really couldn't be bothered. It's a monotonous, modulated groove that has the odd flurry of something else overdubbed on top of it. Nothing to write home about. "Holmar and Ulysses' Electricscrewdriver remix" is more exciting, with a solid kick, squelchy bass and an understated percussive clip-clop that keeps things funky. Some interesting background ambience serves to raise the intensity levels as well. The original mix falls somewhere between the previous two, being closer to Gus Gus' effort, but lacking the funk of the other. A bit of a stomper, but a more interesting stomp than that proposed by Gus Gus. Not up to the standard of Mr Negative though.

Sinister stuff from Soundorom. "Infection" is a sparse groove topped off with a repetitive spoken word sample that effortessly blends in with the prevalent mood. What's that voice saying, "crispy"? Anyway, it's a good track that sems to have more than a touch of the Jamie Jones about it. "Question" initially sounds like an out-take of "Infection" which adds handclaps and some warped noises before the vocal comes in the form of "question" being repeated. Both are good cuts but are a bit too similar to each other to really stand apart.

Good piece of nagging, but subtle, acid with Cooper's vocal adding occasional emphasis. The original stays true to the game and does the paranoid delusion 'ting very well.
"Mazi and Duriez's remix" opens things out a lot creating space and endowing an already good track with epic proportions. Not as claustraphobic as the original or dub, it offers something different and is the pick of the bunh for me. An all-round strong package. 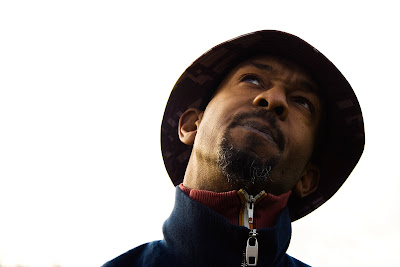 Mr G could make, and I don't want to cheapen things here, 100 tracks all sounding exactly the same and I'd love them all. So, it makes me very happy to announce that his latest doesn't disappoint. I can't explain how happy I was to find these links in my mailbox a couple of weeks ago. Made everything seem worthwhile. The "Wink remix" does a little bit too much to a classic G groove. It's good, and gives it a nice tribal feel, and ups the intensity levels, but it's the effortless simplicity of the original I prefer.

It's an uncomplicated formula, and didn't a track once come out called "If It Ain't Broke . . ."? 'nuff said.

The return of sound. I'd better get a move on. A little bit of ground to make up so here's four more of the best. Off to Paris next Sunday, so I'll try and post a few more before then. 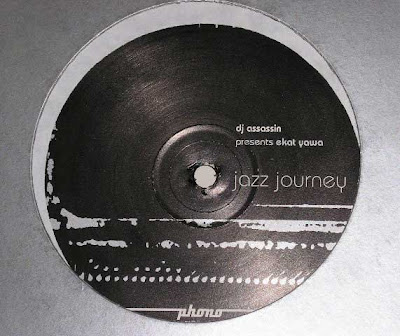 DJ Assassin had his moments. This and releases on Cross - Section and Ugly amongst others. This is truly wonderful though. Swag's golden touch being the deciding factor. I couldn't stop playing this when it came out, and now that I've rediscovered it I'm on another binge. 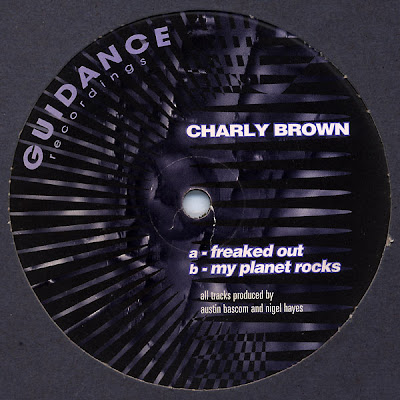 A Wiggle favourite. What a great label Guidance was. Wonderful music, great presentation and here's Austin Bascombe aka Abacus, sometime recording artist on Prescription and Balance, and Nigel Hayes, under the Charley Browne moniker. Mid headlining set burner for when the beans kick in.

One of Colin Mc Bean's many remixes, and it's a belter. The drama is heightened by the strings and the shouting. Great dynamics in this one. It goes like a train. You better believe it. Much more than a one-trick pony. When I grow up, I want a sequencer with a "Mr G Sound" button on it. 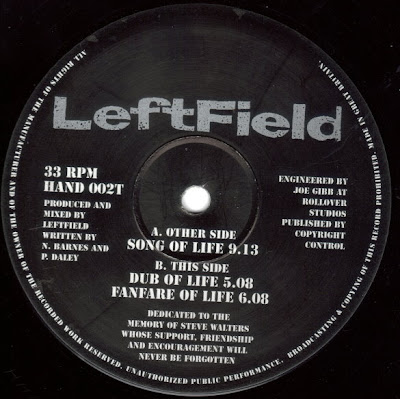 Does this one really need me to wax lyrical? Thought not.
Posted by Pollux at Sunday, February 03, 2008 No comments: Links to this post