Around The Houses With Andy Mac 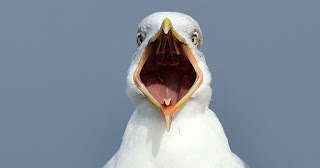 If the term “unsung hero” is to have any relevance, then it’s about time that we started recognizing some of to whom it is addressed. Andy Mac is one of many up and down the country that fits the bill. A scene stalwart in his native Brighton, but known to only a select few elsewhere, his story will be on the one hand familiar, and on the other unique. Andy is a DJs DJ, putting together his mixes with an attention to detail which asserts an obvious enthusiasm. He’s also a bit of a Discogs Harry Redknapp as well, wheeling and dealing when need be. I was meant to go to Brighton a month or so ago and unload all my vinyl flotsam on him, but thought better of it, as it really was two tons of shite. So what would have been a proper chat became an email one instead. It’s been a while since we’ve bumped into each other, but I still have many happy memories of playing at the same parties at the turn of the century,  (one or two anyway). Enjoy the chat and the mix, which shows that his skills have not only aged well, but have blossomed.

What got you into music generally? Parents record collections, etc?

Yes normal introduction my dad had a pretty broad taste, ian Dury to Stevie Wonder, and particularly modern jazz, Weather Report were his favourite band. I used to go record buying with him on Saturday morning, Virgin had their first shop in Brighton and we used to go there and he would listen to LPs on headphones in there then decide what to buy, so I guess that filtered into my psyche.

And what about DJing? What was the catalyst?

Well acid-house generally and specifically the Zap club, and the resident DJs in Brighton at the time that I first heard mixing two tracks together, Carl Cox, Dave Clarke, Chris Coco etc, I was fascinated, obsessed, wanted some of that.

How much do you spend on records nowadays?

I had a few years of mainly just buying digital files and picking up records that came through my hands in my day job (record dealing) but the last couple of years I’ve got the new vinyl bug again, just lots of great stuff much of which is vinyl only. So, on average about 20 records a month (which these days must be close to £200).

As a DJ with a monthly radio show (Under 1 Groove) on 1Btn formerly 1 Brighton FM), how much time to you spend planning for it?

Ideally a couple of hours the day/night before the show. The 2 hour show is nearly filled with new records I’ve bought that month, so it picks itself mostly then just adding a few classics and 1 or 2 from the previous month/months.

When we spoke last week, you said that you were playing a lot of “old stuff”. What is this “old stuff” you speak of, and is this in any way a reaction to a lack of good “new stuff”?

Did I?? I think more likely I would have said new stuff, I’m more excited by new stuff than I have been for a few years, just loads of great new house and techno coming out all over the world. I always like playing a few olds bits amongst a new set but musically things feel real good at the moment for new music.

How thriving is the scene down in Brighton? Do you have any favourite places to play, and how has it changed since I was at university there? (I left in 1993).

Hmmm, to be honest I’m not out loads now. There’s a few (1 or 2) small monthly parties run by youngsters that seem on it, but not loads; and club wise only Patterns (ex-Audio, ex-Escape) that seems to have a policy  supporting underground dance music as a venue. It’s tough for venues, in what is a relatively small town. to thrive with underground music. it’s a much changed landscape from 93, now there are pubs and bars all over in the centre and on the outskirts that are open till 2-3am with music. Often that’s where’s you’ll hear the best local DJs. At the risk of sounding like an old fart I think we were lucky in the early 90s when it was such a big youth movement for want of a better word and 4 or 5 venues with proper regularly promoted nights, long term residents and big national and international names coming through town; but you know, if I was 21 I’m sure I could still have a great time out every night in Brighton!

What hardware do you use? Vinyl, CDs, USB, etc . . . and how much does this matter? What’s your preferred setup, etc?

I like it all, I love CDJs for some of the looping and pitching functions and usb/hardrives for being able to take so much music, easily organized, on a stick or HD to a club or a party. I had a bad back for about 15 years from carrying a huge metal flightcase of vinyl around all night, now I turn up with a little man bag with everything I need, but I still love the tactile nature of mixing vinyl. I’ve taken to doing the whole radio show just mixing vinyl so I try not to be too precious. At home I have 3 CDJs, 2 technics and a rotary mixer so I’m fully covered!

You do a lot of buying and selling records these days. How often have you come across something of real value that was overlooked by the seller?

Well I tend to buy large collections so there’ll be nuggets amongst the cheap stuff but that’s part of the deal, I only buy the cheap stuff if I think there’s going to be nuggets in there. I’m not sure people selling items individually miss much these days as it’s too easy to look up the sales history of an item on-line.

Can you talk us through the mix?

I did it vinyl only, just because it’s almost all new/new-ish tracks which I have  bought this year, and sometimes I can disappear up my own arse doing pre-recorded mixes on CDJs, mixing everything that’s fits in key rather than just a gut/ear selection that I find easier to achieve with vinyl. Musically I guess it’s the slightly darker/trackier/techier style of what I play just because I love to have some sort of theme/brief in mind when I record a mix and I know that’s sort of the end of what you and your blog support Paul; but I tried to get a little of all the styles I’m feeling at the moment. So some dub techno, some tracky stuff, some samply/loopy stuff, some acid always and a dash of techno.

What is your style when mixing?

I’m a blender. it’s what I like to hear from other DJs and I’ve never been a big eq basher, so yes, i just want to play the tracks without too much fucking around.

Who are your favourite DJs, and has this changed over the years?

It has changed over the years. Often I feel DJs have their purple patch when they’re in their pomp, though many have stayed relevant or big for me for decades now. it could be a huge list, but here’s a few, some with the eras when I was obsessed with them!

Going back again to our phone conversation; you mentioned that you were starting to use Ableton. What type of stuff are you (thinking of) producing, and how easy was it to get started?

Sample heavy house music. Getting started was semi-easy; using technology doesn’t come easily to me but I have some experience with other programs: Logic etc, so it’s really just about me putting the hours in and we’ll see where we get to.

Tell me about your music collection now. How many records do you have, and which ones “never leave your bag”?
I have about 6 or 7,000 in my personal collection, nothing never leaves the bag, but when I take my HD to DJ on CDJs then 4000 are always in the bag!

Difficult, but any chance of both a current top 5 and an all-time one as well?

Mood II Swing – Do It Your Way

Ralph Falcon – Every Now & Then

Mr.Fingers – Can You Feel It


Track list on Mixcloud page.
Posted by Pollux at Tuesday, November 28, 2017 No comments: Links to this post 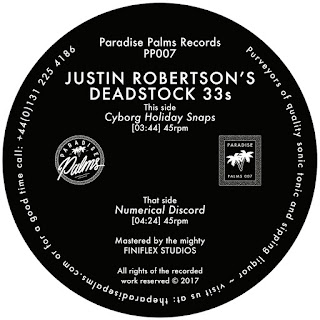 Both tracks here shine a light onto what has become a very popular sub-genre. Popularized mainly by Andrew Weatherall and ‘A Love From Outer Space’. this sound owes a debt in equal parts to italo, acid and middle age. And that’s not meant as anything else but the culmination of years of funk stroking, electronic, hedonistic knowledge manifesting itself on the dance floor. The perfect vehicle then for the dapper Justin Robertson, someone who, in spite of his immense contribution to British house music has never, in my opinion anyway, quite garnered the praise he deserves. Both tracks here, (we won’t bother with the 7” versions) are great chuggers, especially ‘Numerical Discord Swap’ which is framed on two levels by anamorphic keys from the fourth dimension.
Posted by Pollux at Monday, November 27, 2017 No comments: Links to this post 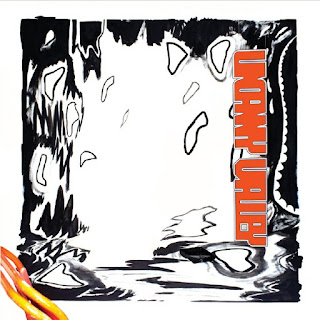 A bit of a throwback this one, coming on like an updated Brechtian sleaze fest, its theatrical credentials are underpinned by a flat beat, as well as similar vocals, which recall Jona Lewie. ‘Popcorn’ also hearkens back, obviously to Hot Butter’s early 70s hit of the same name. It’s the remixes which set this one alight though, for me at least. Manfredas reworks ‘Chain Store’ into a starker, more glacial stomp, while Mondowski employs similar methods on his take of ‘Nowhere to Nowhere’. I’m ambivalent about this, but lean towards the remixes.
Posted by Pollux at Friday, November 24, 2017 No comments: Links to this post