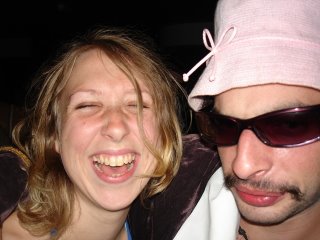 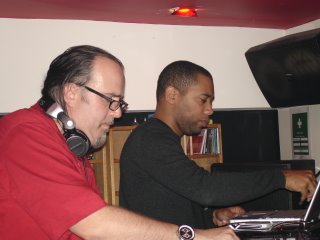 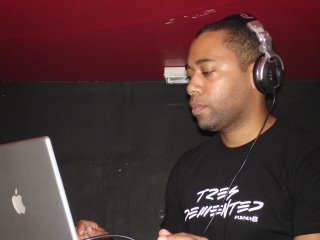 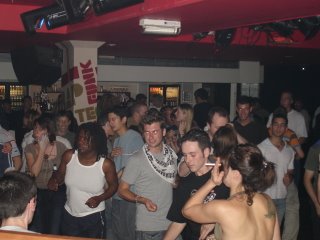 Went to see Carl Craig last night at The Soul Tree and very good it was too. I'm having trouble recalling specific details though, but I can confirm that, amongst other tunes, he did play "Strings of Life" or something that sounded like it anyway. I think he edited it live. "Quelle surprise" I hear you say, but his set wasn't quite as predictable as I'm making out. It was a good night, but not quite as well attended as Derrick May last Mayday bank holiday. Mr Craig used Ableton and CDJs, not laying his hand on one piece of vinyl. Thanks to Jim Masters and Largo for bringing him here and for supporting him well.

Had a text off the mad Irishman this morning proclaiming "This is the real deal." Anxious to find out more, I hastily called him to discover that he was lost in a k-hole in the T-Bar in Shoreditch having just heard Matt Styles play a set and starting to appreciate Jamie Jones, whose style he described as "homosexual Terry Francis," or something similar. I was astounded to get anything coherent out of him at all, although the conversation was typically one-way, something that he took pains to advise me of. It was both illuminating and vitriolic. "Faith" got a coating for their treatment of those privileged enough to be on the guest list, as well as pulling Damian Lazarus off the decks thirty minutes early in order to end the night with some "classics." Music these days needs edge, it's boring otherwise. We want it deep, scary and full to the medulla with narcotics. Happiness, who gives a toss? If I want to be happy I'll get my Ballimorey dvd out. I want to be scared shitless while I'm dancing. I see a new genre emerging where electro and minimalism combine to great effect to create something not unlike the "darkcore" mentality that used to be prevalent in drum and bass. The scene needs its "Mr Kirk's Nightmare." Who's going to come up with it?

Here's the playlist from last Saturday's (26/8/06) Machines Are Funky:

Get Pony - Fuckpony (Get Physical)

(No tracklist but the last track is called "Oliver's Twisted")

These are not exactly new, but they are a true representation of what I've been playing recently.

A Thing Of Beauty Is A Joy Forever - Technasia (Technasia):

Matthew Jonson continues to impress. Just when you thought there might be something he can't turn his hand to, he goes out and makes hypnotic techno with live instruments. Bleepy and evocative.

Veteran of a thousand mix cds. This track has popped up everywhere recently. Simple driving techno with a cliched vocal sample that does exactly what it says on the tin to devastating effect.

Rekorder are purveyors of disturbed, stark minimal electro. If you like it, you'll buy it. The man from his k-hole, he say "yes!"

This has been out for a year or so, but I've only recently found out what it is. First heard it as the opening track off an Ivan Smagghe live set from October '05. Vocals are used to good effect to cause fear in the heart of the listener. This is the type of stuff they play to you in purgatory when they're pretending to be "nice."

My Nightlight (Dapayk remix) - Alland Byallo (Nightlight): Remix of a track that first surfaced a couple of years ago. Dapayk is the master of sleaze.

Every set needs a few spinal columns to support its more outlandish extravagances. This is one good set of vertebrae.

One step beyond the previous track mentioned. Space is the place as far as this production is concerned. It's as interesting for what happens between the beats as the music itself.

God knows why the remix is called what it is. What am I supposed to be thinking of when I listen to this track, muscle marys in chaps with their arses showing? I hope not. It reminds me of a gang of frogs on a tightrope actually, and it's ace.

Oliver's Twisted - Jonny Davies (to be released on Pacemaker): Support your local talent alert. Jonny's come quite far in a short amount of time and will only get better. This is the only track by him that has a name at the moment, so it gets an honorary inclusion.

Mix CD of the Month:

In an already over saturated market this mix shows control, purpose and thought. Have yet to hear Magda's, and I've heard that Cassy's is excellent. But Tobi rules for the moment.
Posted by Pollux at Tuesday, August 29, 2006 2 comments: Links to this post

I've started to feel a bit disconnected from events lately. The family's gone on holiday and there hasn't been much going on, apart from the "Flex" party a couple of weeks ago. I'm alone and it's no fun. You always look forward to it though. Those non-commital days, full of endless possibilities which dissolve before you as you choose a life of sloth to appease your burnt-out self.

Anyway, its a far from desirable state of affairs. The radio show is in need of some serious attention too. Events have overtaken me. I'm going to be a father once again and, while I'm looking forward to it, the economics of the situation aren't too appealing. Still, I've got a good Dominik Eulberg mix on at the moment and "The Chase" is pulsating away around me. "Hit those filters!"

Good show last night, everything went smoothly and, although I'm still unable to mix on-air,(only one turntable in the studio at the moment, we're having a raffle to raise money for a new one, as well as a new mixer), production values have to be kept high and track selection, and, more importantly when not mixing for two hours, programming, has to be impeccable. Not everyone may agree with me when they see the playlist, but I think things went well.

Click here to get the archive for the last show.

A few good nights out to be had in the coming weeks. First is Erol Alkan's visit to The Fez this Thursday, the 17th, playing alongside Priory ressies Sam I Am and The Fish. Bank Holiday weekend kicks off on Friday night at The Fountain on Regent's St wit the visit of Baby G of Eskimo Records from Belgium, support comes from Luke Mallia (Smutt) and Pete Lever. A little bird told me that Tim "Love" Lee will be popping in to lay for an hour as well. On the Sunday we've got the "It's a Bit 2 Fishy" boat party on the Thames. Ressies Pete Lever, Largo and Jonny Davies are to be joined by guests from Madrid and Rome. Finally back in Cambridge, the one and only Carl Craig plays "Bottom Heavy" at The Soul Tree, supported by Jim Masters and Largo. Miss that one at your peril.

I'll try as soon as possible to get back to more regular posting, but not being online chez moi for the past two and a half months does take its toll. More photos are coming too, although I'm going to have to try and borrow a camera for this Thursday at The Fez. A chart will be in place, I hope, by the end of the week. Keep it locked.

Let The Music Play - Shannon
Posted by Pollux at Monday, August 14, 2006 No comments: Links to this post 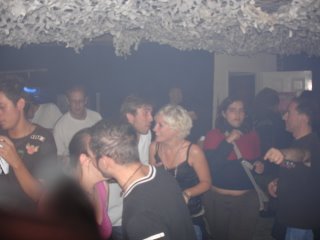 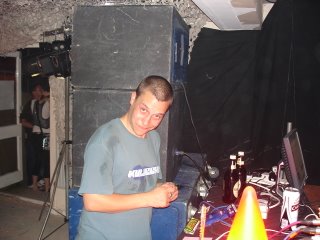 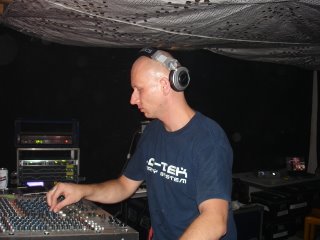 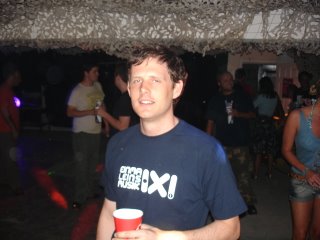 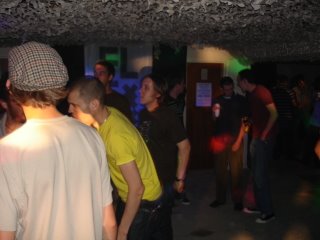 I still don’t know how I got home from it, must be getting older I suppose, and I didn’t even stay that late. I’m talking of course, about the great ‘Flex” party held last Saturday night in a warehouse off Coldhams Lane in Cambridge. I spoke and blathered to and at people I knew and some I’d never seen before. It’s a real novelty to have this sort of gathering in Cambridge, but it still took nearly an hour to get home, due in no small part to me getting lost on the way out of the industrial estate where the venue was situated. So drunk was I that I staggered around in circles for about forty minutes, going down every dead end I could. Should have made amusing viewing for the security staff I suppose.

Can’t be arsed writing anything educated about these, as I’m still hungover from last night.
Posted by Pollux at Tuesday, August 01, 2006 1 comment: Links to this post