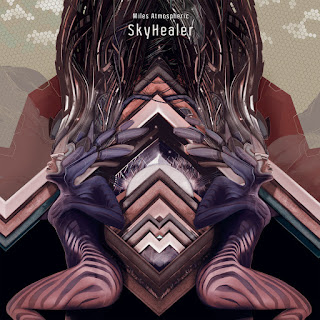 A1: Exoplanetology
A2: Our Future
B1: Waters of Life
B2: See the Light

Firescope’s latest release fuses it with one of the UK underground’s unsung heroes. Miles Sagnia has been making emotively charged deep house for some time now so releasing on Steven Rutter’s label must have been an obvious course of action. This quadruple header presents the listener with a delicately modulated selection of blissed-out beats, each of which highlights Sagnia’s skill in the department of aural architectural mind bending. The tunes here range from the twinkly ambience of ‘Our Future’ to the surging, interstellar journey which is ‘Exoplanetology’. In between ‘Waters of Life’ and ‘See the Light’ respectively evoke primeval and metropolitan transcendental worlds, whose symmetry, while not always obvious, feels natural here.
Posted by Pollux at Wednesday, July 31, 2019 No comments: Links to this post 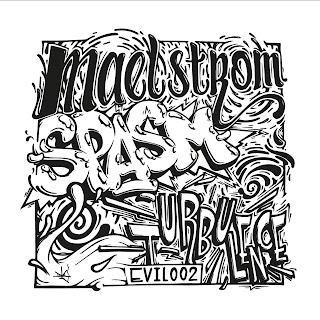 ‘Spasm’ is a throb of suppressed power from beginning to end. It bides its time, safe in the knowledge of its ability to wreak dance floor destruction whenever it pleases. ‘Turbulence’ burns a little more slowly but peaks more intensely. Both tracks are nicely rough around the edges, not in the sense of any lack of completion, more of a calculated one of disciplined dissonance. Maelstrom, aka  Joan-Mael Peneau, knows his onions and has crafted two tracks for Craigie Knowes sub-label which are both snapshot soundtracks to a fast-forwarded third law of thermodynamics.
Posted by Pollux at Tuesday, July 30, 2019 No comments: Links to this post 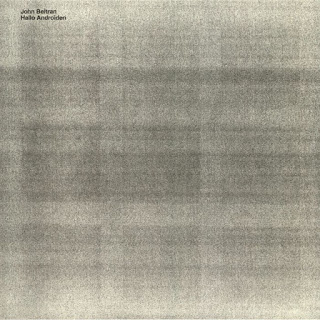 Available on pink vinyl from Delsin’s shop, which is always a good reason to have stuff like this sent to your door instead of buying it at the shop.This is proficient, classy stuff from Beltran, which strikes a nice balance between beats and immersive ambience. You won’t splash around too much in the floatation tank to this collection. 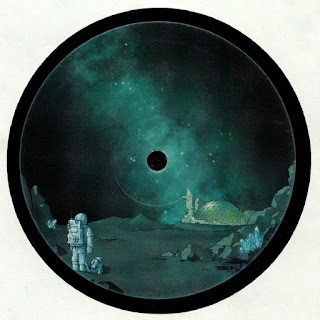 Cracking stuff. The title track stands out but is well-supported by a trio which contribute almost equally to an EP which is a cosmic techno/electro breath of fresh air. Reedale Rise remixes ‘Inversion’ without overshadowing the original. 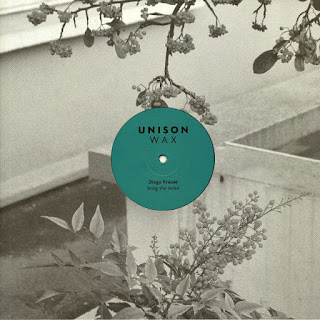 I’m glad I finally discovered Diego Krause, but sad it’s taken this long as he makes tunes which I love. On the face of it these are low slung groove monsters with syncopation in spades . . . and that’s about all really. So many do this type of thing but they come out hollow in the process. Not Mr. Krause, who on checking his back catalogue, has been conducting object lessons in MDMA funk for some time now. 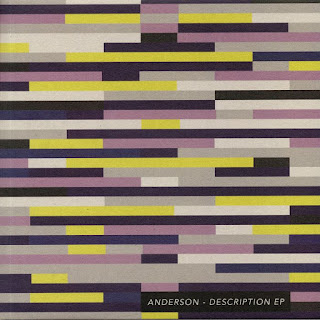 I hadn’t heard of Anderson before this release, but am happy to say that now I have, I’m impressed. ‘Description’ sounds warm, dense and would mix in very well with something off ‘Bring the Noise’. Great drums throughout means that there is always a recognizable foundation around which the bass can wind. A little bit whimsical too, which is nice. 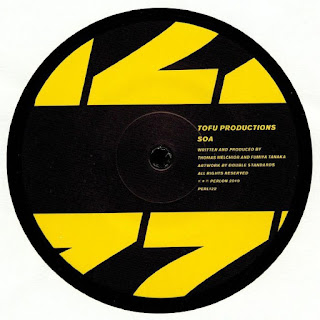 Fumiya Tanaka and Thomas Melchior make up Tofu Productions and together they have come up with  a double header which, while it does take a predictable Perlon path, is off-kilter and eccentric enough to keep things interesting. There’s a reassuring thump in ‘I Believe I Need’ and a nice off key organ in ‘SOA’ which absorb and give body when needed. 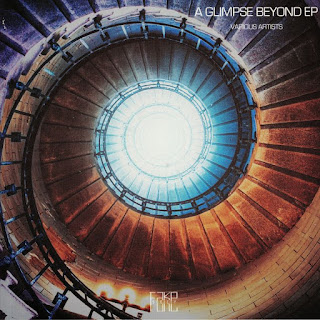 I was led here by Camelia, whose spacey journeys I find most agreeable. This seems to be Fake Society’s signature sonic footprint, and it’s great to have records like this to wash the  more minimal, and sometimes one-dimensional tracks in the mix. Lizz, Sublee and Los Bastoneros also feature. 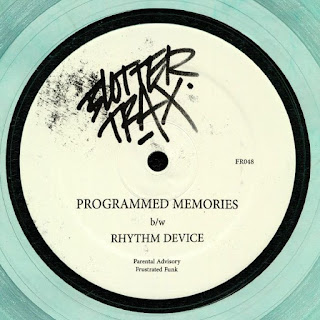 A nom de plume of Magda and TB Arthur, I don’t know why but I’m surprised to see their output released on this label. On listening to this I’m immediately struck by a resemblance to Louderbach/Troy Pierce. It’s certainly a bit of a departure for Frustrated Funk. It has menace though, and that’s an important quality. 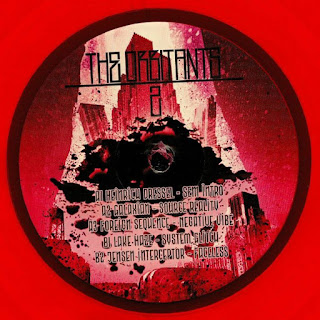 A various artists release on red vinyl featuring, amongst others, Heinrich Dressel, Jensen Interceptor and Galaxian. Dressel does ambient, but for everyone else it’s a bit more uptempo. A lot of bases are covered here, with Lake Haze’s Lovecraft influenced ‘System Glitch’ being my favourite. 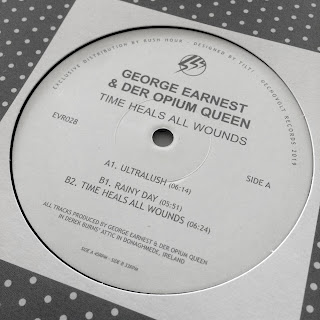 A subtly varied three tracker, with ‘Ultralush’ standing out as an abstract floor filler, the type that envelops the dance and endows it with a dream-like ambience. ‘Rainy Day’ is an onomatopoeic stroll on wet pavement while ‘Time Heals All Wounds’ does something similar but at a more joyful tempo. This is a clever release. 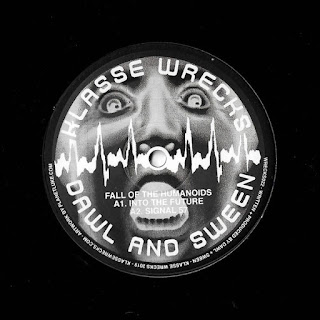 I like Dawl a lot, which also means that I must like Sween too, as he is a long-time collaborator. This EP, which follows up last year’s ‘Rise . . .’ is again a very competent blend of electro, techno, bleep and beats with the all important pervasive rave ingredient thrown in. Ominously funky.
Posted by Pollux at Monday, July 29, 2019 No comments: Links to this post

Storming mix from Switzerland's finest. The highest compliment I can pay this is that it would go off at Wiggle. If you want a taste of what tech house used to be before it became bastardised, check it out.
Posted by Pollux at Monday, July 29, 2019 No comments: Links to this post 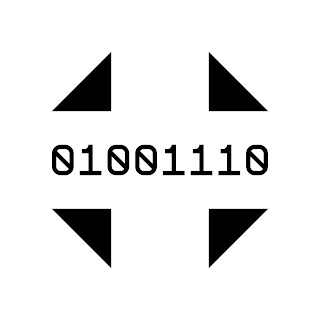 A debut release, recorded live you say? Well colour me interested; particularly if its being released on a label which gets it right to such an extent that the very action of doing so can now be regarded as conceptual. The little snippets of information that I have been able to garner thus far have all told me the same thing, that this is a release which reeks of early Aphex and Autechre. Well, even though I was around at the time and have a reasonable recollection of said stuff, I’m ignoring it all and going in eyes wide shut. Listened point to point this release is a very gratifying linear experience. Everything is swathed in aural Vaseline, eschewing precise definition and focus. The melancholia is strong, but not overwhelming and there is just the right amount of restraint. That is until we get to ‘Acid Billy’, which feels bizarrely out of place. Having said that, as it introduces the second side of the vinyl release it does herald a game of two halves, with ‘Tone Forest’, ‘information Superhighway’, and ‘Dusty Dossier’ adding extra syncopated support. That’s not to say the first four tracks lack energy, but there is a vibe departure after ‘Doctor Effect’, which I like very much. I like this release a lot, and its making me think about things I don’t normally think about, which has to be good.

Posted by Pollux at Saturday, July 13, 2019 No comments: Links to this post 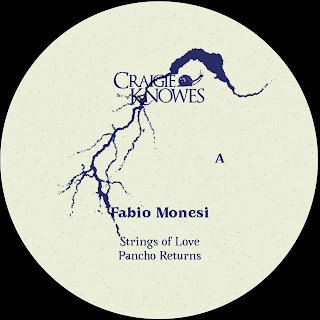 A1: Strings of Love
A2: Pancho Returns
B1: Flanger City
B2: The Raw Theory

Founder of Wilson Records Fabio Monesi debuts on Craigie Knowes with a four tracker, which sees him spread himself thinly like a polyvalent sonic veneer. There are shades of ‘Sweet Dreams’ in the title track’s riff, and with ‘Pancho Returns’ the vibe is definitely a retro one, shifting between arpeggiated italo fanfare and wistful melancholia. ‘Flanger City’ is a radical departure in style and intensity, relying on breaks and an undulating techno hoover to cause maximum damage, while ‘The Raw Theory’ is a Detroit-inflected jaunt into the fluctuating aural undergrowth.
Posted by Pollux at Thursday, July 04, 2019 No comments: Links to this post