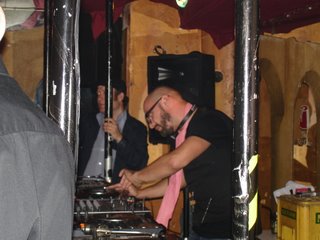 I wasn't happy with Saturday's show. Truth be told, I'm becoming more and more cantankerous about everything in general and nothing in particular. I'm currently a hybrid of Victor Meldrew and J G Ballard, someone I'm really starting to warm to. I've got into Ballard rather late, but after the excellent South Bank Show last week, better late than never. I'll be starting "Kingdom Come" this week.

Anyway, I digress. Saturdays show was quite strong content-wise, but not so strong in the mixing dept. I decided to do a short mix but completely forgot that one of the turntables was quartz-locked, which made mixing impossible until I realised what the problem was, thus an Ableton-inspired take on modern mixing, only with turntables, which should have cut and chopped and scratched its way through about ten tracks in thirty or forty minutes became a few tunes sequed together without my weary tones to add interesting facts.

I was out on Thursday 21/9 at the Fez to check out Justin Robertson. I couldn't stay for all his set, but liked what I heard, apart from the general sound, which seemed to distort very easily. It wasn't anything like as clear as I'd heard when I saw Adam Freeland there in July. The crowd was down to. A pity because Mr Robertson is an excellent and constantly unsung DJ, as well as being a quite credible recording artist. A member of "Loinrock" as it said on the flier. Cue visions of amorphous tuna steaks belting out tunes in a parallel universe. Next up is James Lavelle on October 12th. The week after I may be up in Manchester for one of the Warehouse Project dates, the 21/10 sees Los Hermanos and Suburban Knight both live, as well as Robert Hood's Grey Area. Should be good watching a cross-section of the minimal maestro's brain and spinal column flopping around in a formaldehyde-filled DJ bubble. Hope he plays "The Pace."

Further dates for your diary in Cambridge Techno City. Jim Masters tells me that Green Velvet and Rolando could be playing "Bottom Heavy" at The Soul Tree. Mr Velvet next month I think, Rolando maybe before Chrimbo. James Priestly could be at Luke Mallia's (Smutt's) night at The Fountain on Regent Street. Tom Hallmark and Largo are starting up a new Sunday afternoon/eveningthing at The BoxTree and Ed of Badger Attack is currently searching for a new venue with Kittenflux's Dave Kelso. Incidentally, Kittenflux and Pacemaker supposedly had a party in the Grantchester meadows last night. I hope some farmcore featured. Who cares as long as they kept Mary Archer awake all night.

Oh, and before I forget, I'm sure I'm not the only one who gets pissed off very easily at the goons who are employed as "security" at clubs. These people stop me going out as often as I'd like, and then seem intent on treating me like a fifteen year-old once I'm out. The twats tried to charge me to get into the Fez on Thursday night. Even though I was clearly on the list their minimised intellects insisted on doing battle with my colossal cerebellum. Next time I go I'm taking Robert Hood's Grey Area with me.
Posted by Pollux at Monday, September 25, 2006 1 comment: Links to this post

It's an interesting time for music at the moment. For the first time in a while, techno seems to be popular, or becoming so, in the UK. If we're really honest it's never really caught on outside a few enclaves like Voodoo in Liverpool, The Orbit in Yorkshire, Lost in London and Club 69 in Glasgow. OK, I know other places have always veered that way, Slam at The Arches and that place in Birmingham where Surgeon had a residency to name but two, but somehow music that has always layered the electronic music matrix has burst out all over like a ripe carbuncle and sprayed its minimal pus on the overground. I suppose every things time comes eventually, and I'm by no means sure that this current proliferation is an entirely good thing.

In any case, what I'm saying is hardly news, it's been smouldering now for the last few years. Funky house seems to have been killed off once and for all, along with funky techno, the type pushed by labels like In-Tec, to make way for an electrotechhousehybrid. I'm certainly not one to rampantly start pigeonholing everything which comes my way. As far as I'm concerned good and bad music are the only two genres worth discussing, but as far as the mainstream is concerned, these are relatively interesting times.

Check out the new Cassy mix cd "Panorama Bar 01" (Ostgut ton) for an interesting ride through some examples of the sounds that are currently heading down the right strasse.