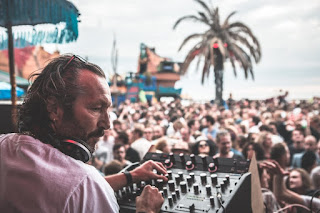 Improvisation on the dance floor within the strict confines of house and techno is something left to the imagination of the DJ, not the recording artist. The conservative confines of genres which have rarely progressed tangibly for the last twenty five years are not the correct spaces within which to experiment, at least not overtly. “Self indulgent” is a convenient label to hang on a DJ who plays for him/herself, and straying into more interior surroundings is always likely to heighten such accusations.

For some reason I’m thinking of Harvey’s Resident Advisor podcast from a few years ago which, I suppose, is an exercise in rampant eclecticism rather than improvisation. (Check it above, and the comments here). That’s generally the way forward I suppose. Another DJ whom I’ve been listening to a lot, from the comfort of my bedroom I hasten to add, I have yet to make it over to LA or indeed, haven’t been out for a long while closer to home, is Lovefingers.  Categorising these chaps is as dangerous as it gets; Lovefingers seems to play a selection of music that is, on the one hand a motley mix of styles but is, on the other, as Californian as it’s possible to be. Not because the music in questions comes from there but because of its overall vibe.

More impressions and random thoughts soon. In the meantime, keep it locked.