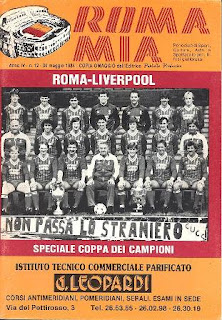 Historic broadcast of part of John peel's show the night Liverpool beat Roma on penalties to win their fourth European Cup. That night I was watching the match at a mate's house, trying to keep it together while the shoot-out was in progress, much like Peelie. There's also part of a news broadcast reporting on the miner's strike. Liverpool was full of union members collecting for the miners every day around that time; their buckets were always full.

The match is won just after the news broadcast, at around twenty seven minutes, hence the playing of 'You'll never Walk Alone' followed by church bells. Peel then plays 'Come  Back' by Wah!, has a chat with Kid Jensen after, then sticks on "my favourite record of all time" for "all British football fans whoever they support".