A Quick Word With A Guy Called Gerald 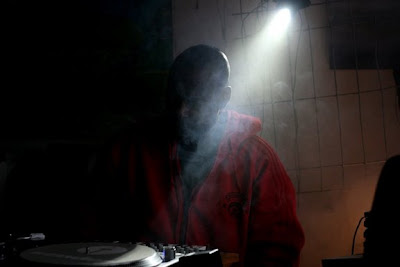 A Guy Called Gerald played in Cambridge over the first May Bank Holiday weekend as part of a Hacienda reunion tour. Yours truly was due to go but was cruelly laid low by a severe bout of gastric flu. I'd also arranged an interview with the man himself but had to pull out for obvious reasons.

Anyway, I phoned what sounded like a sleepy Gerald to apologize and make my excuses. I also asked him if he'd mind answering a few questions by email, to which he agreed. Three months later the answers arrived. I'm not a fan of interview by correspondence as there can obviously be a lack of sponteneity but sometimes it's the only way. Anyway, many thanks to Gerald for answering my mostly predictable questions, and to Megan for setting it up.

A Brief Electronic Chat With A Guy Called Gerald

I've just been reading a book review of Mark E. Smith's autobiography "Renegade: The Life and Tales of Mark E. Smith" and he lays a lot of importance on the necessity to keep developing and not look back production-wise. (Got no direct quotes, sorry).

You're known best for "Voodoo Ray." How far do you agree with what Smith says?

I totally agree with him.

Since starting out you've lived in both New York and Berlin. How have these two cities affected your creativity?

Berlin more so than New York. New York wasn't as adventurous as I thought it was going to be. Berlin is very raw and understated and gives you a chance to interact with other artists on a more humane level than the bling thing and competitiveness of New York. In Berlin I don't feel any danger and I can't be creative if I feel danger.


The last album you put out, "Proto Acid The Berlin Sessions" was aimed squarely at the dancefloor, both in the way it was presented (as a continuous mix) and musically. Is this the way you're generally working now and what can we expect in the future?

That's one direction I'm working. I feel like I'm from an abstract dance background. I feel I'm making music for different areas within dance. Proto Acid was the result of a few sessions I had with this label Laboratory Instinct in Berlin. It was specifically for them. I'm working on a web shop at the moment and you can expect a whole spectrum of rainbows coming out. I am looking forward to finally having one base for all my music - past, present and future. I've been holding back on releasing a lot of music because I didn't feel I could trust the system.

Being a Wallasey native I'm intrigued to know how you're relationship with Rham Records came about. How did you end up signed to them?

They approached me after hearing my demos on Piccadilly Radio in Manchester in 1987.

How did "Trip City" happen and would you consider a similar collaboration in the future?

It happened because we were looking for an interactive club format. Trevor Miller's book was actually written in 4/4 time. Things have moved on since then. No I wouldn't do a book with music there a whole spectrum of mediums to experiment with now.

You've been quoted as saying that the music should be the focus of any live performance and not the artist (something along the lines of people should be dancing, not watching me . . .) Do you think that electronic music ever needs to put on a show?

No. Basically the music initially was designed for the recipient to create their own entertainment. In the old days this was called dancing to the music. Some of the early dance music actually chanted things like "dance, dance, dance, move your body... " these things were actually encouragement to dance. I think current generations have been gradually brainwashed into dependency of visual entertainment and unless they have the visual and the aural they turn off.

What does "keeping it real" mean to you or do you prefer to "keep it unreal"?

Keeping it real to me means just getting on with it really. Not getting involved with the bullshit. I feel like my job is to focus on production and making interesting music.

You get a sizeable mention in Kodwo Eshun's excellent "More Brilliant than the Sun" where he talks about your attitiude to sampling, rhythm and time. He also mentions the "ghost break" and says that your work at the time "Black Secret Technology," "teems with inhumanly detailed percussion, which demands posthuman motor reflexes." What do you think he's getting at here and do you see yourself as carrying on the tradition of Afrofuturism?

Most certainly. I think he's trying to say I'm a twig on a branch of a tree in a jungle of rhythmic diversity which grows out of Africa.

How important an influence was Greg Wilson and what, besides technological advances, has changed in djing and live performance since you started out?

Greg was instrumental in making me realise the possibilities of re-editing already made music when I was around 14. I don't think there's a lot that has changed apart from the technology. It seems that some producers come from a djing background - I think there are very few of us who come from more of a dance background. The dancer is always looking for excitement - something that pushes them physically. Whereas a DJ producer often looks for ease of use - he will often take a pre-set sound over trying to create something unique which seems to create a never ending loop of similar sounding sampled music. Most of the people who are interested in experiencing new sensations within dance often end up drifting into stimulants of other kinds to create the same feeling. Also I find alot of DJs focus on the techniques and the machines rather than the result.

Which artists, past and present, to you share your ideals with?

Any artist who strives to be individual in their sound.

Playing in England is always fun. You get a chance to have a laugh.


Check:
"In Ya Head featuring Mia" new 12" released on Perlon August 4th.
1995's Black Secret Technology has been remastered and reissued on July 28, 2008.
Look out for a new live mix on Samurai.fm's upcoming Berlin Special.