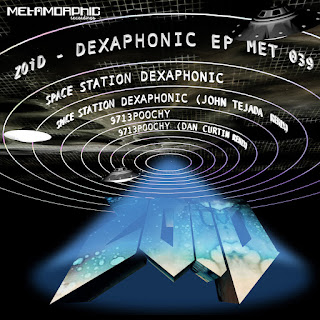 Metamorphic releases have always been a byword for deep, emotive house/techno and this latest release from Dublin’s Zoid feeds into the pervasive narrative with two tunes that operate on a level previously only known to those with  a predilection for the finer things in life; such as fine wines, Belgian chocolates and chicken in a basket. ‘Space Station Dexaphonic’ is a gloriously horizontal piece of space jazz, the type of stuff that should have been heard in the Mos Eisley Cantina. The synth swirls and depth adding drama and gravitas. ‘9713Poochy’ uses similar fragments but is much tougher and confrontational. If it weren’t for its constant kick it would fall apart, which is why it feels like an occasionally jerky journey to the centre of the Earth. The two remixes are great as well, with Dan Curtin’s remix sounding like Herbie Hancock on acid and John Tejada’s not departing too much from the original, save to make it more Balearic than it already is, and give it some swing.